I'd had Dark Alliance Steppe Warriors ready to go for quite some time but found myself stepped-out after working on the Khazar/Pecheneg army last year. So how could I make this as easy on myself as possible, while still bringing them up to a look that would fit into my (also lazily) painted existing elements?

By dry brushing all metals, that's how! 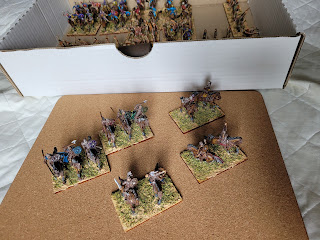 Mini review: these steppe warriors are a fantastic buy, as the various figures can be judiciously mixed into most if not all eastern European mounted sets, including Germanic and Scand/Rus-origin. They have very little flash/mold marks, and the plastic is easy to clean off with a sharp knife blade. Sculpts are excellent. There are no 'weird' or super-unlikely weapons such as elaborate flails with long chains, which are a bother with several 'historical' sets. There are even extra weapons and scabbarded bows to hang on mounts! The only minor negative is that the set of 12 is really two sets of six, meaning that (as a standalone set and not intermingled) it's hard to make them look individual enough.

Assembled, the set makes four 'heavy charging' four 'medium melee' and four 'distance' poses/fitouts, and mounts match these in terms of armor and saddle-hung weapons. I configure the two sets of six into three LH of 2 pieces each, and two Cv/Kn of 3 pieces each.

With a basecoat of solid burnt sienna building up color on mounts and riders is easy. The big decision I make is to skimp on detail for metal, because if I color them in too specific a way they won't go with Huns or Germanics or Slavs if I do want to use them there. So the end result doesn't quite match the previous Khazar/Pechenegs. That is a very minor point next to the bases - I ended up pouring far too much flock down compared to the lightly-flocked originals. Good enough for now!