What if Julius Caesar had tacked a different course with the Belgii, and the legions of Caesar's time had invaded the lands of the Caledones?

I laid out an imposing high-ground-heavy board, though the surface is a little too slick for convenient use: 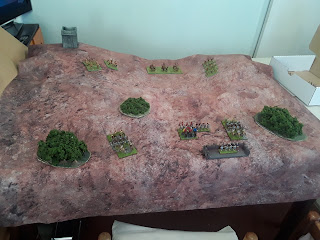 The main rule changes from DBA3.0:

Here's an overhead shot of the deployed sides to make it clearer. LCh span the glen, Wb supported by the lone Ps are divided on the high ground. For the Roman part a Bd element is left back at the fortified camp, because fast foot and LCh can easily zoom around a wing; and each wing forms into column so as to be able to advance past the bad going spots that could form a trap otherwise. 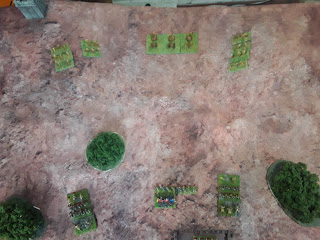 I felt at the time I was not being 100% fair to my Mary Roms - their default is plenty of Bd and they could have scraped up many more Ax, but didn't. Even Arty would have been pretty handy. 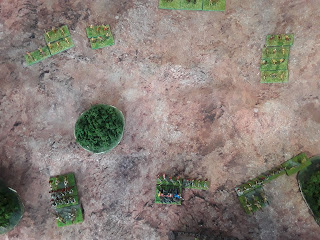 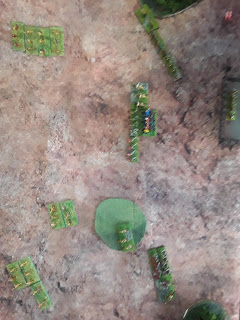 In terms of the race for bad going, the Cals roll too low to spring their Ps ahead but not too far ahead. They watch as the MarRom Ax breaks off (bottom picture). The MarRoms form a defensive line right, advancing their left. 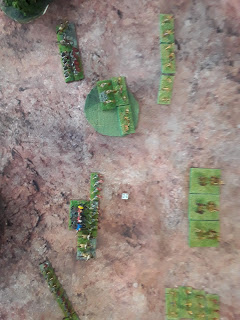 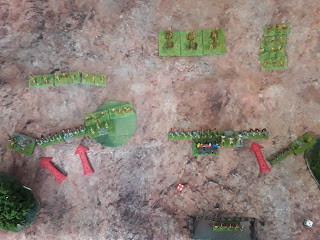 With a decent roll the Cals (who stay in good command distance) challenge the MarRom left, and a fight for the scrub ground develops. Not wanting the Cals center to isolate their left the MarRom centre spreads out and advances. 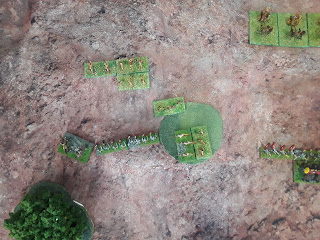 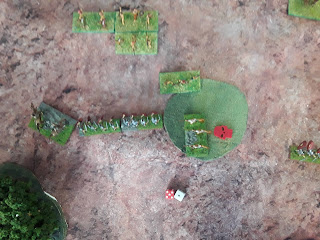 The Spanish Ax proves a tough foe! First blood to the MarRoms with a 5:1. 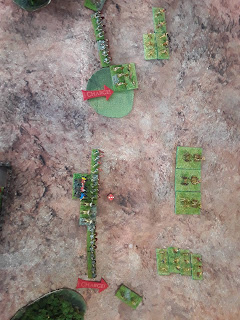 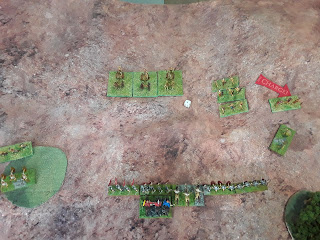 Buoyed by this the MarRoms continue to push forward. But command distance is beginning to become an issue. In response the Cal left "marks" the Ps, forcing an unpleasant number of choices, all of which can be easily resolved by always rolling high PIPs... which ain't gonna happen. 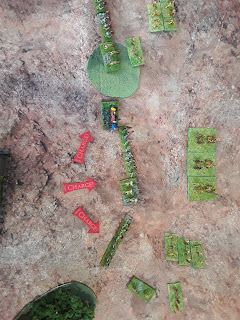 One PIP has to be spent getting closer to the left flank, but the MarRom center has little to fear from LCh so pushes forward. 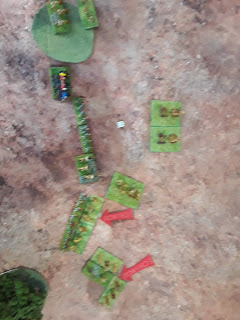 Oh woops, fast Wb are suddenly in the MarRom faces! And although you can't see it from the overhead shot, those Bd are caught downslope. 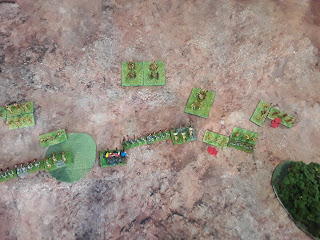 The loss of the Ps was expected, but losing a Bd really hurt. From here it's desperation for the MarRoms. 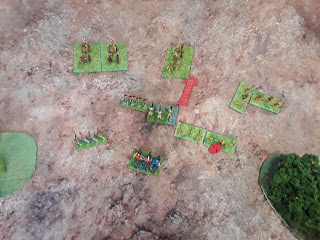 The MarRom line fragments as the last Bd element on their right crumbles. Time to flee and write a convincing report!
Posted by andrewmclaren26 at 7:06 PM